Released originally as a browser game in 2010 created by indie designer Mike Bithell. This simple platformer will make you bond with various characters, despite never hearing them speak, and will leave you playing this more for the story than the gameplay. Thomas Was Alone brings you within the computer system of the company ‘Artificial Life Solutions’, who’ve been performing experiments with their creations. Lo and behold, a ‘network connection spike’ causes some AI’s to become self aware. These AI’s take the form of various polygon shapes and you must guide them to their individual portals on each level, utilising each of their skills in order to successfully traverse the blocky and dangerous landscape.

A plain-Jane game to look at, consisting of various 2-d platforms and coloured shapes for characters. Well if it’s looks aren’t winning any prizes then the narrated dialogue is. Charming and unique amidst the usual bland and forced dialogues among many games, Thomas Was Alone provides greater characterization of 2-d shapes than most games can accomplish with fully rendered human models.

You never actually hear the blocks themselves, but rather you hear their thoughts via the narrator: Danny Wallace. Bithell’s script was inspired by both Douglas Adams and Danny Wallace, and exudes the same endearing, British humor. The story is a delight to experience and Danny’s award winning narration is definitely another reason to add this game to your library.

“Claire needed to come up with a superhero name, as soon as possible. ‘Claire’ was rubbish.”

The sound track is unobtrusive and adds to the relaxed feel that this game has, however it’s not as interesting or as grabbing as other indie game soundtracks. That being said, the very understated soundtrack is not detrimental to the voice-over, and perhaps a more involved score would take away one of this game’s strongest aspects, it’s commentary. 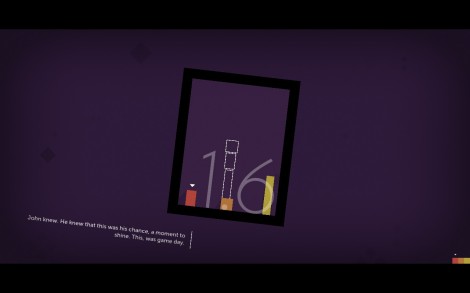 These may seem like the most heroic blocks you’ve ever met, but just wait till you meet Team Jump.

I think this game is a must-play for those who are interested in making games themselves as it showcases how if you do one aspect of a game well enough, that aspect can make the experience wholly worthwhile. Thomas Was Alone will subtly make you fall for it’s characters. It’s slow and surprising, but you will find yourself beginning to want these blocks to succeed in their endeavours, and you’ll be playing to see how it all turns out.

I have a certain affinity for Chris.

All in all, it’s a simple-pleasures kind of game, combining puzzles that aren’t too mind boggling with platforming elements that aren’t too frustrating, to make a pleasurable wind-down kind of game. The difficulty curve is so smooth you’ll never hit a wall, so to speak. Explore the ‘world’ of these cheeky little AI’s and have a chuckle along the way. When the first line makes you crack a smile you know you’ve found a winner.

Great for those who love a bit of character and it’s not too demanding, so it’s easily accessible to casual players. For Lemmings lovers among you.